A Big Shout Out to REBECCA McFARLAND for giving me the heads up on her guest appearance on the cheeky new series “Franklin and Bash”. Legal Eagles Brecking Meyer (Franklin) and Mark-Paul Gosselaar (Bash) pile on the tomfoolery with women exposing their boobs in court and lawyers kissing clients on the stand being their brazen route to upholding justice…hehe. In “Jennifer of Troy” REBECCA portrays a magazine publisher whose assistant claims she was fired for being too hot….There lies the twist as the assistant is incredibly a Plain Jane!! In fact, I’m more inclined to praise REBECCA’s sultriness in this episode…;) Known for instilling a uniqueness in all of her roles, she’s of course famed for being Bartender Leanne on “Two and A Half Men”. Charlie Sheen wouldn’t be the only one hitting on her on that show or off it that’s for sure…:) The natural allure that she projects will steer adoring eyes towards her in no time. With Rebecca and her fellow hotties making such a notable impact this June all the way till September, this could end up being right up there as Best Summer for actress watching..:)

This bewitching blonde has stolen our hearts on more than one occasion with impressive turns in “Human Target” and “Saving Grace”. Enjoyed seeing her as a Cheerleading Coach admonishing pretty Minka Kelly on my fav show “Friday Night Lights…WOW! She’s a whiz with all the different accents especially them Texan and Southern ones. Oh my, she does belong to the elegant group of women hailing from New Orleans, Louisiana. If you are enthused with her, I suggest a visit to the REBECCA MCFARLAND OFFICIAL SITE. There’s a Über-cool ethereal attractiveness about REBECCA complimented wonderfully by her ravishing blue eyes and does her hair always look immaculately coiffed or what…:) She has a genuine ability to habit engaging characters with the zestiest of charms. 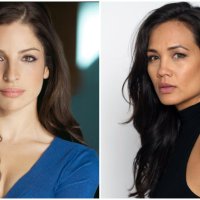