– She’s a Miss Shockfest Finalist and is nominated for the Sexiest Shocking Sweetheart award. That means she’s double the temptation!
– Receiving accolades for her role in “Teacher’s Day” does mean she could go on to become one of these year’s most desirable horror actresses.
– Danika is a compelling watch in her other must-see film “Slink”, coaxing us with enchanting ways despite this being low-budget horror fare.

– She is the creative maven behind “Truth or Dare” which is enjoying buzzworthy appraisal from all corners of the industry.
– Up for Best Director and Best Actress awards, this pretty blonde is potently captivating on both sides of the camera divide.
– If there’s one actress who radiates sensuality even when she’s covered in blood then Jessica is your gal to covet!

3. Tonya Kay – Star Of “Within The Darkness”

– Multi-faceted and multi-interesting with plenty of sass, she’s currently one of the sexiest vegetarians to grace showbiz.
– Whether she’s a pin-up model or the premier dancer at burlesque shows, Tonya’s to die for figure is seductively yummy…;)
– Don’t miss her as Jesse, an amateur ghost hunter and tech expert in “Within The Darkness” which has scares galore!

– Still one of the most beautiful faces on film, Sean can still turns heads which I’m sure many still hold a candle for…:)
– Her role as the foul-mouth mom in the ‘Alice in Wonderland aka Hollywoodland’ like “Crazy Town” reminds us all why we fell in love with her crazy onscreen versatility.
– After all, she’s one of the nominees for the Best Actress award and aren’t we glad Sean has return to beguile us for many more years!

5. Suzi Lorraine in “Pin Up Dolls On Ice”

– Her film “Pin-up Dolls on Ice” is up for the Shocker of the Year award and we have to say the perennially saucy Suzi had a big part to play in that!
– It’s evident how stunning she is but she has also received praises as being one of the kindest souls on the planet and a genuinely professional talent.
– She rates Jamie Lee Curtis and Heather Langenkamp as her idols but we already know Suzi’s a much adored Scream Queen in her own right.

Honorable Mentions (Terror Hotties We Need To Have A Devotion For): 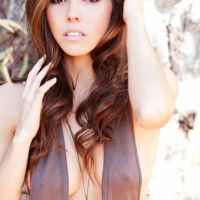