We are often hooked on amazing women and Constance Brenneman is one such lady deserving of our adulation. She has an illuminating charisma be it onscreen or in a photo spread and she’s headed for the big time by way of a most remarkable indie feature. Constance stars in “The Toy Soldiers” which is closing this year’s edition of Dances With Films in captivating fashion. Having already graced the red carpet, Constance will no doubt be a must-see in “The Toy Soldiers” which is set during the colorful ’80s. She plays Mary Harris, a mother in a custody battle who handles her pain with alcohol in what many are calling a stellar performance from her. There’s grief as well as courage within her character and these nuances are ably handled by Constance with mesmerizing effect.

I was myself pleased to hear that Constance also knows Amanda Fuller (of “Last Man Standing” fame) whom she meets together in a creative council setting once a month. Amanda as you know is already one of my favorite actresses who started on the independent medium before her multiple successes and it won’t be long before Constance replicates her achievements. She does have four feature films coming out in 2014 and is also currently working on producing/starring in a sketch based television show. One of her features, the thriller “Night Eyes” has all the ingredients to keep you on the edge of the seat. She’s the leading lady as Linda Raines, a woman trying to escape from an abusive relationship and discovers she can hear voices. Her pixie haircut is bound to draw comparisons to one Mia Farrow who some will always remember for being a standout in “Rosemary’s Baby”. On television, Constance can be seen Episode 6 of the A&E psychological series “Those Who Kill” starring Chloë Sevigny. Watch Constance shine in the days ahead as she embraces the mantle of film festival darling. 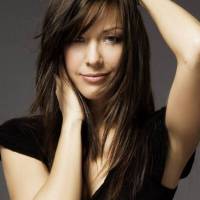