Super sensual Jacqueline Lord is the screen siren who exudes the undeniable sizzle factor and has multiple talents in tow. She has the face that beguiles on film, print, the web and any medium you can think of. All this means viewers will want to catch her in the actioner “The Night Crew” as we know this genre has always been graced by the sexiest headliners. Jacqueline will certainly be heating up the screen in “The Night Crew” as she likewise does in her series “The Vigilante Diaries”. As the assassin Jade, she’s every bit the personification of being dangerously sexy and a definite candidate for addiction. She also stars alongside luminaries such as Jason Mewes, Michael Madsen and MMA icon Quinton Rampage Jackson. In this era of influential women onscreen such as Jennifer Lawrence’s Katniss from “The Hunger Games” franchise, there’s never been a better time to be in awe of female characters who kick ass, be they good or evil. We do crave for tales about female assassins and “The Vigilante Diaries” fulfills it.

With her being a singer, I recently discovered that Jacqueline is influenced by Tori Amos and that’s one unconventional yet intriguing artist we’re both huge fans of! On television, hit shows such as “Two And A Half Men”, “Hawaii Five-O” and “Franklin and Bash” have given us an excuse to swoon at Jacqueline who is alluringly picture perfect. Couple with her vision for creativity, she is certain to enthrall us for years to come.

Due to the sheer number of actresses on show in November, I’ll be doing an interview with the luscious Jacqueline in the coming weeks which is a moment worth waiting for…:)

Remember to drop by the JACQUELINE LORD OFFICIAL SITE which has a wealth of info on this multi-talented brunette. 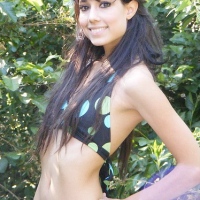