– Kristen Nedopak is one of the most influential and important women of our time who as the EXECUTIVE PRODUCER / CREATIVE DIRECTOR / CEO of THE GEEKIE AWARDS is the ultimate HEROINE for Independent Creators Across The Globe!
– She should by now be regarded as a Sex Symbol too and while I may not have managed to get an interview this time around with her, this article is a glowing tribute to the Goddess Of All Things Creative, the ravishing Kristen Nedopak.
– Kristen is an immense reason why I hold female talents in high reverence and just like the Mother Of Dragons, we are in awe of Kristen, The Breaker Of Chains as she ensures our creative voices resonate.

– Briana is the potently alluring mix of sensual verve and comely innocence who sizzles as soon as she graces the screen.
– She plays Roxanne, a serial killer in the vein of Dexter and her sexy facade is the last thing you’ll see before you bloody ending!
– You may have already seen Briana alongside Halle Berry in “Extant” these past weeks and there’s no doubt we will be indefinitely pining for her.

– One of the most adorable actresses on the planet, Jessika is impeccable when it comes to essaying an array of women and she’s thoroughly eye-catching.
– She plays Yuri, the possessed housewife who comes with really scary beady eyes and demon-enhanced maniacal behaviour!
– The upcoming “Rush Hour” TV series should thrust her into the limelight in 2016 and should be the year the world falls head over heels with her.

– Just like Sarah Hyland, Laura is blessed with virginal looks that never seems to age and a honeyed voice that’s pure delight.
– She plays Gabrielle, the conniving and rather ruthless gossip queen with the inside track on horror happenings including who is killing who!
– Laura is a witty actress, often embellishing her characters with wickedly funny humour yet having a sustainable appeal that’s so desirable. 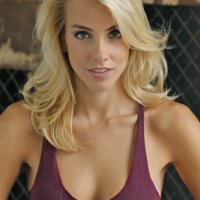