Australian sweethearts of the screen are always on our minds and the comely Kelly Walker will catch our eye this week. She’s the leading lady of “1,800 Days”, a story of the effects of incarceration on couples. Kelly plays Ava, a newlywed whose world comes crashing down when her husband is sentenced to prison for 5 years. This Queensland-born (QLD being one of my favourite places in the world) entertainer is on course to tug at our heartstrings as the long-suffering wife and she’ll thread the emotional spectrum with an unerring poise. This is a feature she wrote/produced and starred in which is premiering at HollyShorts Film Festival this week at the Iconic Chinese Theater in Hollywood so she’s more than genuinely invested.

Kelly was one of the first actresses I blogged about and her geniality has always been a captivating part of her makeup on top of her radiance. She’s also an adore-worthy comedienne and notably guest-starred on the hit series “Last Man Standing” which of course has Amanda Fuller who is always a fav on this blog. Kelly is the endearing vision who if not for my work commitments, I would be flying over to LA in support of her in a heartbeat. Kelly Walker is a future star in the making and she has the wholesome appeal that global audiences will love. 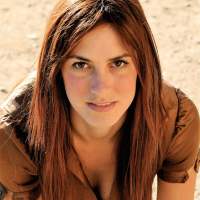