La La Land is indeed a place of many wonderful young talents and the delectable Lara Shah exudes graciousness as well as exquisiteness. She stars as the soon to be bride Katie in the fun indie comedy “Trippin’ To The Altar” which premieres this week at the Idyllwild Film Festival.

The very inviting Lara is of Indian descent and with the rise of actresses with an Indian ethnicity namely Hannah Simone (New Girl), Summer Bishil (The Magicians) and Nishi Munshi (The Bounce Back), Lara’s place in our hearts is assured. Here’s Lara revealing more about her character Katie in “Trippin’ To The Altar” and her take on why indie films have such a passionate following.

1. You are starring in “Trippin’ To The Altar” which is screening at Idyllwild Film Festival 2017. Could you give a tease of your role as Katie?

Katie is a sweet girl-next-door turned crazy-lady in the moments between “yes” and “I do.” The movie is a journey into the inner workings of my character during the major stress that is wedding planning. What Katie wants, who she is, and how she connects to her fiancé – those factors are put into question as she is recorded during the wedding planning process.

2. You also recently won the Best Actress Award for your work on “Trippin’ To The Altar.” What were the best moments of playing the character?

It was such an honor to play Katie and I am indebted to my director and producers for giving me the opportunity to do so. The moments where Katie’s guard was let down – those were my favorite. I loved filming the testimonials because they got down to the core of her realest thoughts.

3. Comedy is a genre which takes a lot of guile and inventiveness. What were your inspirations to embody the jovial side of your character?

The dynamic between couples is often times entertaining without intention. The relationship between Sam and Katie is relatable and sweet, but there is this power struggle during the planning that lends itself to the comedic aspect. Katie is convinced that she knows more about how to plan a wedding and is far more prepared to create the wedding of her/their dreams, and it’s in that ego where I found some of her best moments.

4. On that note, were there any funny incidents on set and do you consider yourself as having playful traits?

I don’t recall there being a single day on set without laughter, with or without the cameras. The most memorable funny moment while filming involves the sweet dog of my director and producer. One of Katie’s testimonials is absolutely priceless because Oliver steals the show! I definitely have playful traits. Life, albeit difficult, is beautiful, and we are meant to live it with laughter and humor. I love my work because I get to connect with people; that is absolutely the greatest gift.

5. Who is the actor and actress you would most love to star with in a feature and why?

There are so many actors and actresses who have blown me away by their growth and ability to connect and relate to their audiences in the last few years. If I could choose an actor to work with, it would be Jake Gyllenhaal. His transformation in “Prisoners” was so captivating. As for an actress, I would love to work with Emily Blunt. Everything she does is gold – drama, comedy, action, etc. She can and does do it all! To get to watch her in person and get to be toe to toe with her would be a dream come true.

6. Could you tell us more about your upcoming projects?

I recently shot a major car commercial and am excited to see that air in the Indian market. Also, I was so fortunate to get to play Meredith Kercher in the Amanda Knox story for “Scandal Made Me Famous” on ReelzChannel, which should be airing in March. As I continue to get settled into my new life here in Los Angeles, I am looking forward to having many more amazing opportunities come my way!

7. The indie genre whilst sometimes under-rated is the fertile platform for compelling stories. What do you think is the appeal behind such great storytelling?

The indie genre is so unique because it doesn’t have to be as formulaic. There are rules, and some are adhered to and others are broken. There is less of a guideline and standard to follow. The appeal is in the actual storytelling without as much concern about box office numbers and distribution and using a “name” actor/actress. There is much more harmony in the moving parts of creating a rich, interesting, original story to tell an audience from the aspects of writing, casting, directing, producing, editing, and all the other parts of moviemaking. What I love most about indie films is how honest and gritty they can feel. They seem most representative of real life.

8. In your opinion, are distinctive beauty, the talent to stir hearts, or the ability to connect with audiences important as an entertainer?

It’s definitely a combination of the three. However, the underlying factor of all three is honesty. Beauty comes from authenticity, the ability to be yourself, to be vulnerable to the circumstances and to your audience. It’s being completely exposed in expression of the soul. The stirring of hearts comes from being relatable, open, and someone the audience can identify with on a personal level. It’s presenting the best of yourself and your character at the same time.

Connection is key to being an effective storyteller. My favorite word that I feel embodies authenticity, vulnerability, and honesty is the word “Spark.” I have it tattooed on the back of my neck and it is my reminder to use my head and my heart as an artist to spark a connection with humanity – when I perform and in my everyday life.

As you can tell, Lara is a perceptive storyteller with the acumen to navigate diversely fetching roles. Do look out the adorable Lara as an aspiring entrepreneur in “Funemployment” which should be released soon. She’s an intelligent and stunning actress everyone should be smitten with. 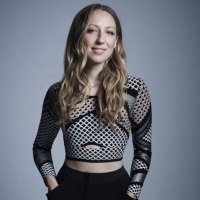