– Mandy Evans is a name who has taken the indie world by storm with her rivetingly layered performance in the dramatic short “Pickup”, a character study on being addicted to pleasures of the flesh.
– She’s already in attendance at this year’s Austin Revolution Film Fest so be sure to see her shine as Megan, a seemingly happy wife and mother whose carnal needs via Tinder almost proves to be her undoing.

– Having recently won the Best Actress statuette at the Madrid International Film Festival, Mandy is sure to garner even more awards as she cements herself as a compellingly authentic indie darling.

Katie Uhlmann in “My Roommate’s An Escort”

– Her web series “My Roommate’s An Escort” has garnered multiple award nominations including Best Series Director and Best Actress In A Series ensuring the radiant Katie Uhlmann is very much a headliner!
https://www.instagram.com/p/BZQGOwVFlNO/?taken-by=katieuhlmann

– On course to be one of Canada’s premiere talents, her turn as Kesha who has a whole other life as an escort and comes into the life of her room-mate Heather (Trish Rainone) is endearing as it is fascinating.
– As a multi-faceted entertainer, she’s already won accolades for her performances in the comedy genre and Katie’s body of work as a writer/director will undoubtedly gain her even more recognition.

– Attendees at the Austin Revolution Film Fest must be having a ball with the wealth of wonderful female talents on show with Jennifer Enskat being the creative force behind “Real Mommy Confessions”.

– The fortitude, organisation and dedication in juggling multiple roles on her comedic web series is in itself worthy of admiration! What viewers get is a delightfully humorous look at the mayhem that parenting can bring.
– Together with her partner in crime, Bianca Jamotte, Jennifer is a nominee for the award of Best Series Director and this already signifies her inherent artistry as a film-maker on the rise.

Jen Pogue in “Time Out”

– Nominated for the award of World Actor/Actress, Canadian sweetheart Jen Pogue is stealing hearts left,right and centre as the leading lady of the romantic short “Time Out” which has dazzled the festival circuit.
– Hailed as a kind of time-travel feature without the actual sci-fi element, Jen is captivating as one-half of a couple who decide to revisit their younger selves as a means to build a future together.
– She’s also known for being an accomplished producer having produced and starred in the stage play Hands Down at the 2017 Toronto Fringe Festival as well as having 2 upcoming films that she co-produced in post.

#TimeOutShortFilm nominated by @austinrevolution for best world short, best director, best actors, best producer, and excellence in acting… V v excited/honoured/humbled for recognition of two things I really like doing a lot. Thank you Austin! We'll be crossing our fingers and stretching our stomachs for some BBQ in September🤞🏻 Love my 1st little baby film and it's crew so💕 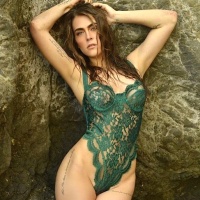